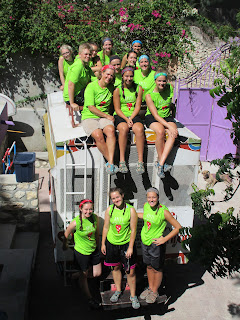 Today we had pancakes for breakfast, my personal favorite. We had about forty five minutes after breakfast until we had to load the tap tap. In those forty five minutes there were braid trains and card games. This is the usual pre-day startup. When we got ready to load the tap tap, it turned out that we were not going to be leaving right the due to another tap tap stuck outside the gate. So while we were waiting, we all climbed onto the top of the tap tap and took a group photo. After the photo, we still were not ready to go so we played a couple of games of bean bags. After the bean bags it was finally time to go. We took two tap taps into the field today, one of them was filled with the kids and the other was filled with the adults. It took about thirty minutes for us to get into Cite Soleil where we would be filling jugs and jugs of water. When we get there there are children surrounding the tap tap waiting for us to get out. As soon as we get out we all have a child in our arms. We stay at each place for about forty five minutes. During that time we either have the chance to play with the children, help carry buckets of water for people, or help hold the big hose that the water comes out of. At the first stop I helped with the hose and getting all the buckets in line. The hose area can be a little overwhelming with all the people and the occasional person who tries to cut in line. After all the water ran out of the truck it was time to go. When we all got into the tap taps the children waved us off and some even ran after us. When the truck runs out of water we have to go to the place that fills up the truck. Today when we were there we all ate a bunch of snacks before we would go to our second stop. Once the truck was filled it was time to go. Our next stop was close to the water fill spot. Once we got there there were more children waiting for us. They all looked so happy to see us, and as we took them into our arms they would hug us, kiss us on the cheek and look so happy. This stop was much like the first one. This time I played with the children. They all like to play hand games. It is so cool to interact with the children. After the second stop we came back to the guest house. When we got there we went and played soccer with the neighborhood children. They are very good. After soccer we drove to the grace village restaraunt. They had the best pizza there. Once we finished eating we went home. The drive is forty minutes and we sang the whole ride home. All of our vocal cords are a bit scratchy now. After we got home we had word of the day and the slideshow. 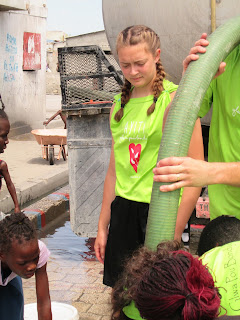