We have now had the privilege of leading five Slumberland teams to Haiti.  Each team is uniquely and divinely selected by God to serve the Haitian people.  We have loved the opportunity to see each persons unique gifting come out at the right time in the right place serving that unique need.  Slumberland is a company that gives generously and we are blessed to have associates that model that giving with their own time and energy.  We are so proud of what our team accomplished this year.  If you have had that urge to go…its time.  When you see the dates announced for the next trip, we can’t encourage you enough to just Go For It!  Ask anyone from the past five teams, I guarantee that everyone one of them will encourage you to push through any fear, worry or doubt and just GO. 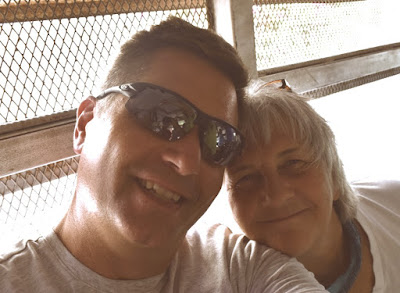 Lisa and Michael
Posted by Healing Haiti Mission Team at 1:41 PM No comments:

Reflections on a week in Haiti…

A person can see photos, watch a video or maybe even a documentary about poverty in third world countries.  But, until you actually step out of the comfortable American culture you have no clue of the reality that is out there.  Walking out of the Port-au-Prince airport the temperature tells you immediately you are in the tropics, but unlike most Caribbean get-aways this week in Haiti wasn’t about relaxing and recharging, but instead finding out if I would be able to finally “walk the walk” I talk to myself about as truly being the hands and feet of Jesus to those so desperate for His love. 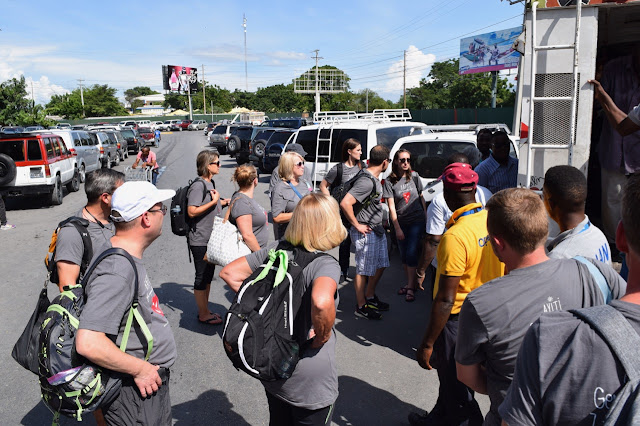 The arrival at the Healing Haiti guest house proved to be a bit of an oasis from the lack of amenities seen on the drive from the airport.  Subtle home-like comforts were welcomed, but the oppressive heat that lingered all week was a constant reminder of my softness in comparison to so many I encountered throughout the week.  As the week continued and the AC was turned on in the bunkroom I shared with a couple others as we went to bed for the evening; I thought about the different homes (corrugated tin shacks) we visited and how warm each of those folks must be every day and night.  The heat never rests in Haiti. 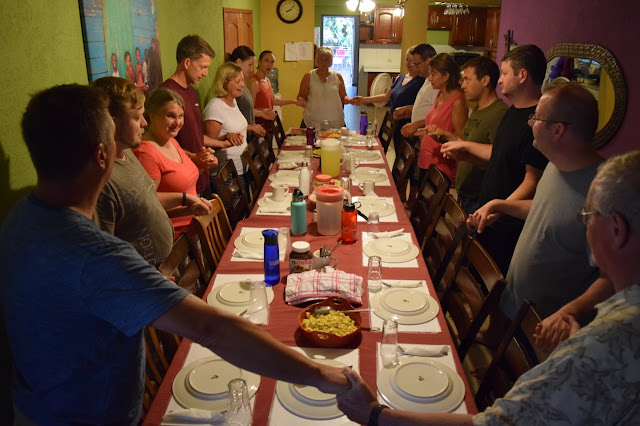 Serving on the water truck in Cite Soleil drives home the importance of basic survival and human needs.  Not only for water, but also the need for love and touch and bringing the light of Christ to what otherwise seems to be a very dark place when observing the lack once again of so much we take for granted here at home.  Entering a neighborhood with our first tanker it was like the ice cream truck that drives through my neighborhood in the summer as all the kids come running when the horn blasts its entry call.  They are running and smiling and shouting “Hey you, Hey you” as the sights and smells of the poorest slum in the Western Hemisphere smack me square in the eyes and nose… all I could think is “how does this happen?”  The next hour was an absolute pedal to the metal adrenaline rush of chaos.  The Haitian locals know the drill and expectation; however, for my first time it was a head first dive into the deep end.  It was scary, emotional, physically demanding; it was raw.  The water comes fast out of the tanker while the 5 gallon buckets and large shallow tubs just keep coming straight for the water hose.  Kids are pulling on you to be held while older siblings and mothers jostle for position in a makeshift line.  The hope is that everyone gets their fill before it runs out; if not, another day will have to pass before the tanker comes again.  Water and Jesus, the essence of life. 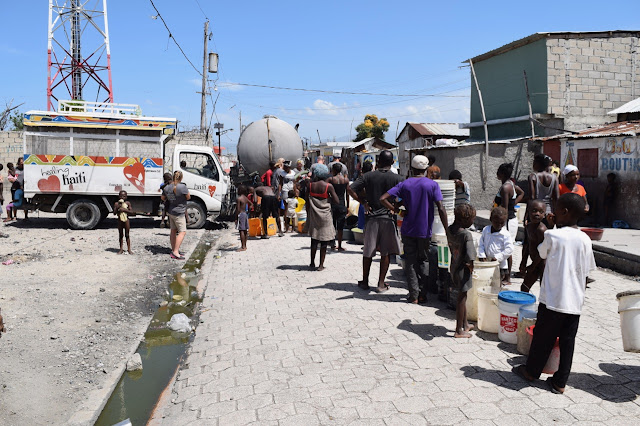 As a diversion between water stops, we walked through a different neighborhood to see the ocean.  This certainly was no million dollar water front property in the tropics like your mind could drift off to dreaming about; no, this view revealed to me what “survival” really means.  It showed me a people doing what they had to do to survive.  A little bare bottomed boy grabbed my hand and led me along a well-worn single-file foot path where I had to turn sidewise to fit between the housing structures.  As we winded through the buildings, people were going about their day.  I saw a woman making what appeared to be “dirt burgers” as she meticulously laid them out after frying them over an open fire.  The boy was pointing down different paths and then turned to be lifted up; he had flip-flops on this feet, but he knew enough where we were that I was a better option to carry him than for him to walk by himself.  It was then we entered this open area covered in sharp edged sea shells 4 to 6 inches deep.  The ocean waters were within 50 yards and the ground was a bit unstable; the smell of salt water and sewage burned my eyes and nose as I saw a number of pigs rutting in muck and decomposing garbage… again, “how does this happen?”   Survival skills are learned at a very young age in Haiti. 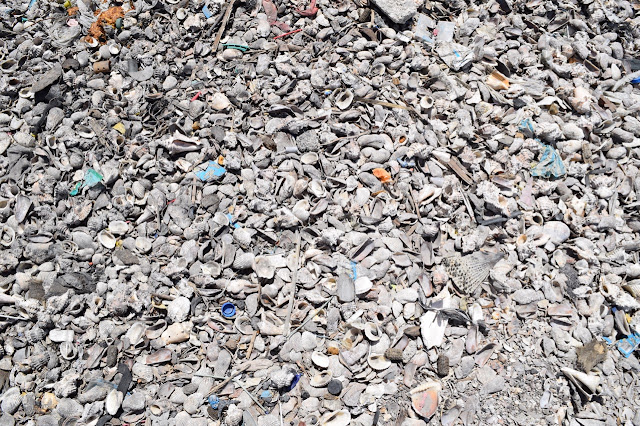 Driving into the countryside provides a perspective a bit more relaxed.  Less people, less noise, less commotion… but still signs and opportunities to help those in need.  We visited a couple community “elders” by essentially performing Haiti’s version of “Meals on Wheels”; delivering food, washing their feet, singing and praying with them.  Sharing their smiles and love of Christ is powerful and a testimony to His grace and mercy.  Seeing and learning about the wonderful empowerment Grace Village is providing to the community of Titanyen is truly a work not only of the Haitian people, but by God’s loving grace as well.  The school, the clinic, the church, the bakery, the restaurant – all examples of the local people making it happen for themselves.  Empowerment. 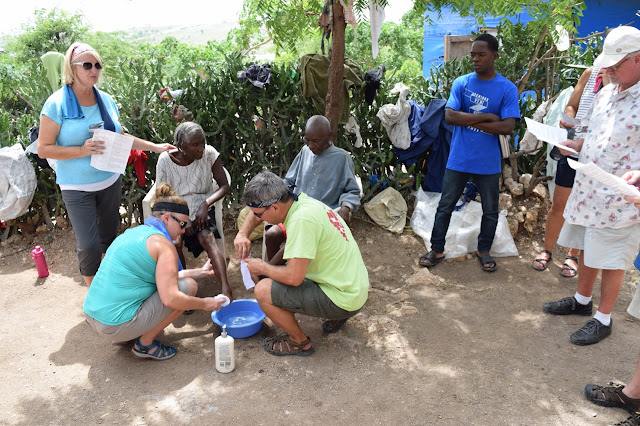 Finally, I want to introduce a new friend of mine.  As our Healing Haiti “Tap Tap” pulled up to the La Phare Orphanage, it was apparent one 8 or 9 year old boy was looking for a friend.  He immediately grabbed my hand and led me into the open court yard that looked to be their play area.  He sat close to me and I couldn’t help but put my arm around his shoulder.  He couldn’t tell me his age, but when asked his name it sounded like he said “Vincent”.  I repeated it back and he nodded in agreement, so Vincent it was.  We played with the colorful parachute as a larger group and then broke off to do bubbles and jump rope; all the time Vincent making sure he knew where I was.  We colored, sang songs and played with Play Doh too.  It was an hour of carefree timelessness… I wasn’t thinking about anyone or anything else except me and Vincent.  Towards the end of our visit, I thought about my own kids.  Two girls, 12 & 10 and two boys, 7 & 5 and I thought… “When was the last time I have spent one hour with each of them individually in that same carefree timelessness mindset and why am I not doing something about it now?”  Spending time with those who mean the most to you… family, friends, God. 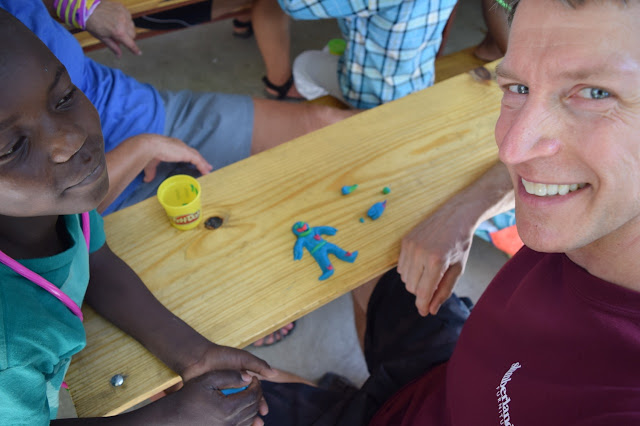 It has been an emotional week for sure; something I knew was going to happen even before arriving in Haiti.  It took me a couple years to finally say yes to going on this trip and now that I have I can’t imagine not going back again.  It was my prayer to be open to hear God’s call, to learn His will for my life as a takeaway from this Haiti experience.  Now is when the real mission begins; right here, right now.  How I live and what I do to be the hands and feet of Jesus Christ my Savior. 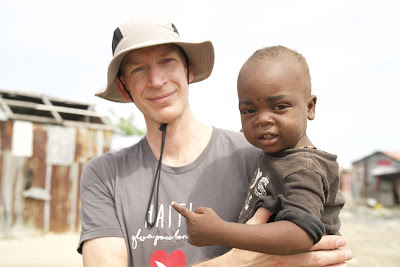