Wow, what an incredible day today!  The first night here, as our team sat around in a circle describing a first impression phrase of what Haiti was to them, Laura stated it as “beautifully broken”. Ya’ll that phrase could not describe today more perfectly. Our team spent the day simply loving…. Loving on sick and dying babies, loving on special needs, loving at a wound clinic and loving at an orphanage. We loved on sweet kids that the world would typically put in a category of being broken… and let me tell you, it was far from broken, rather incredibly beautiful. And these places we went could have so easily just wrecked us or had us wanting to cry, but I can tell you this, it was the ultimate love, Christ’s love that overpowered those emotions and just overwhelmingly poured out of us on to those sweet babies and children, and as a team I can tell we are so thankful for that ultimate love working through us.

I, Ashleigh, had the opportunity to be apart of the team that went to the home for sick and dying babies this morning. I truly had no idea what this trip would entail, but I did know that it would do a work on me, because leading up to this day for about a month since we got a tentative schedule of this trip, I would break down in tears just thinking about or talking about what this trip would maybe be. Ya'll, it was such a sweet time to be, as a team, able to go in to these few rooms and love on these kids. There were two rooms you could go in, one room with little little babies that were too sick to go outside and really that had babies that were so sick they didn’t even respond too much. I remember going up to a tiny 8 month old and he just laid there, not responding to much, but I just picked him up, and instantly could feel his skin burning on mine. And my heart just broke, but in that moment I found something beautiful because even though he was so sick, I began talking to him, making the typical baby goo goo’s and his tiny face lit up with a smile. These children, in the midst of sickness melt your heart with a smile that you can’t even understand until you’re there experiencing it. The second room held babies/children that were still quite sick but were much more responsive, filling the room with many tears but even more giggles and smiles. Sitting in between the metal cribs on the tile floor playing with, feeding, rocking, and just loving on these children rocked my world today and simply challenged me to just love, love with a love that Christ lavishes on us.

I, JoAnn, had the opportunity to go to Dare’s, an orphanage for kids with special needs. This orphanage held 25 kids, many of whom had severe deformities, mostly of the legs and feet. Not only were they physically handicapped, but there were also those who were mentally handicapped. At this orphanage there was a baby boy by the name of Robinson whose life story would already be considered a miracle. A man who had come with healing Haiti a few months back saw this boy just lying out, and could not get the image of that helpless Robinson out of his head. As he returned to the states, he made a quick turn around to come back to Haiti on his own for a weekend to find this baby boy. After taking all day to search for him throughout the city, the miracle happened when he found this baby boy who was then put in Dare’s getting the love and attention he needed. Today our team got to meet this boy, and our lives were just as impacted. But back to the orphanage, there was a small patio and small play area outside where we got to do chalk and bubbles with the kids. Grace, a healing Haiti missionary, brought her guitar along and we all sat and sang with the kids. There were many tears, and tears were brought to my eyes as I heard some of the sweetest voices I have ever heard. A verse came to mind, that beautifully captured that moment,  “The lord is good to all, and His tender mercies are over all His works” Psalms 145:9.

I, Kim, along with my team leader, Amy, had the opportunity to go to the wound clinic in downtown Port Au Prince today.  The drive itself was an experience!  No stoplights, traffic laws, right a ways, constant honking and yelling.  Chaos…but then the nuns started praying and in the midst of all this chaos I was reminded that God is here in this moment.  The street we turned down to get to the wound clinic does not look wide enough for a car to drive down.   The street is lined with vendor after vendor, carts being pushed down the middle of the street. People walking down the middle of the street selling things to make a living.  As the truck makes its way down the street people literally barely move out of the way, they are so close to the truck they can easily be grazed by the vehicle.  Then we just pull over and we have arrived at the wound clinic.

Being a nurse, I knew this visit would be a struggle.  There is no doctor, no doctor’s order, no sterile equipment, and minimal dressing change supplies.  The nuns gave us a quick in-service on how they change the wounds and we begin.  Several people get their wounds changed simultaneously in the clinic or some in the alley outside the clinic by the nuns and volunteers.  I did the best I could with the supplies I had and had to be okay with that.  I kept in the back of my mind that I was making a difference because without this wound clinic these people would not be getting any help at all.  The language barrier is a struggle but the nuns reminded me that the only language we need is love and a giving heart.

As we dropped off Amy and Kim to go to wound care, the rest of us loaded up and went to La Phere orphanage, where we yet again, loved on kids through playing soccer, drawing with chalk and singing worship songs. There was a lot of love poured out by our team today, but I think we can all come back and say there was a lot of love filled up and overflowing in our hearts from all the sweet children we came in contact with today… and that is only something that could have been done by the Lord we are here serving! 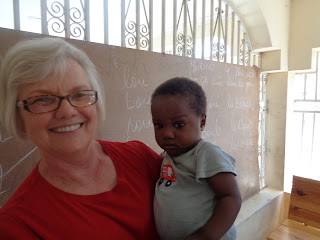 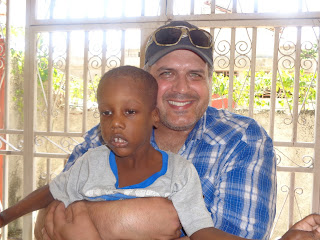 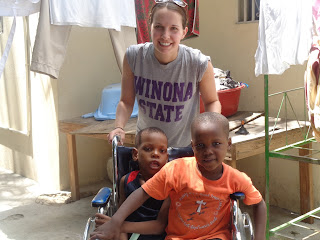 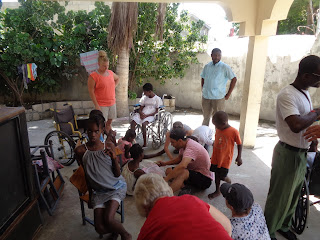 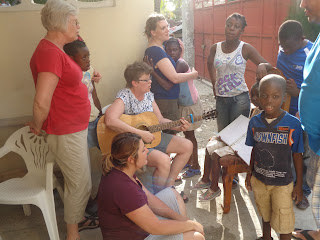 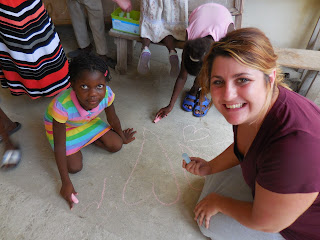 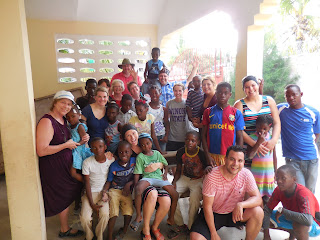 Posted by Healing Haiti Mission Team at 8:59 PM No comments: