We started the day with anticipation of a church service full of Haitian worship and movement of the Holy Spirit. We went to Grace Church in Titanyen. We didn’t understand most of what was being sung, but it didn’t dampen the spirit of worship for us. Some parts were written side by side in Creole next to English which helped us not only in understanding what was being sung but with our continued practice with our Creole vocabulary. There were also a couple of songs that we knew the tune of the music and could sing side by side in English and Creole together mixed. Oh, the sound of the children singing was just beautiful. It does something inside you when you hear the children sing in one accord with voices raised to the one true Savior. We had taken a vote with the majority to win what our Sunday afternoon was going to consist of. It was a unanimous vote to go to Wahoo Bay and spend the day playing in the ocean. We drove for about 45 minutes to get there from Grace Church. We got to see the terrain, landscape, trees, and houses. The closer we got to the ocean the differences became very drastic. We had been used to seeing the congested traffic and loud noises. Granted, it was Sunday so it may have been different during the week but this was the impression of today. Tin shacks that now changed to 2 story brick buildings with balconies, smooth streets, and less road rubble and trash. Did I mention trees, lots of trees and GRASS, I don’t recall seeing much grass at all this week. Coming up to the resort was breath taking! To see the mountains on one side of you and the opposite end seeing ocean so clear going as far as the eye could see to meet with the skyline of blue with clouds dipping down. BEAUTIFUL. It's something about the ocean that took the heat from our mind. The day was just perfect. We got to talk with several other guests there also. Did you catch that, we spoke to several others because they were able to speak English well, instead of listening to our choppy Creole. That was another big difference from the areas where we had been serving. Beauty, trees, grass, cooler temps, AND English would have made for a memorable day alone, but that isn’t the kind of team/family that we are. We each tried new things or encouraged others in facing and overcoming fears as we went jet skiing, banana boating, kayaking, and swimming to the ocean trampoline. There are stories inside those adventures that will be told directly from the team, just not today. We went to an area grocery store to buy some coffee, plantain chips, vanilla and almond extract. It would be considered comparable to Walmart with a Haitian slant, but it puts the slogan for Hy-vee to shame with “there’s a helpful smile in every isle” because there was literally someone at each end of every isle, and throughout the store watching the shoppers, helping also if needed! It’s raining tonight which is a welcome sound and smell. This land is so dry and thirsty we can’t help but be happy for the water. The flip side of that as I’m sitting under the porch canopy typing is that I’m dry. Many that we served this week are not that fortunate. Though they may have a make shift roof over their heads, their walls aren’t secure and weather proof, their doors don’t go to the ground and if they have any windows they don’t have glass, only bars or cloth and their floors are dirt. Those also are where their beds are but many don’t have them either so the dirt floor is their bed for them and their children. So as the rain is good, my heart hurts. These Haitian people are so beautiful. They struggle so to take care of basic needs and yet when you have conversations with them and ask what specifics can we pray for them, they aren’t grumbling for what they don’t have but instead they ask for strengthened faith. They aren’t grumbly! We have so much to learn from this part of the world. Tomorrow is going to be a hard day. We all just skirt around what it will bring because we don’t want to start the swell of emotion in saying goodbye. Goodbye to the all those that have touched our hearts as we served and also to our family that we have become, both from the states and those that the Lord uses walking with and amongst us, using us, molding us, teaching us and drawing us closer to you! Our God IS an awesome God. He reigns! – Teri

Today is the “eve” of our leaving. What a wonderful Lord’s Day we have had! We went to Grace Church for the morning worship. On our way we saw people on the way to Church – man, woman, and child all on one “moto.” Haitians are so respectful of entering God’s house. I saw a man bent over wiping the dust off his shoes. The Creole language is so beautiful, and we listened to them worship in song. After Church we drove out to the ocean…lush mountains a backdrop for our fun at Wahoo Bay Resort. Our day of rest consisted of listening to the lapping of the waves, paddle board, and jet skis. To top it off, the American missionaries have now proved wrong their theory that the banana boat is un-flippable. We managed to flip it twice! God is good and no one was hurt or sunburned! It is bittersweet to think of going home. We all miss family, but know how hard it will be to say goodbye to our new friends. -Sharon 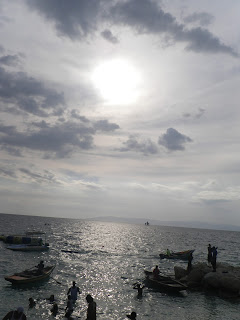 Posted by Healing Haiti Mission Team at 9:12 PM No comments: