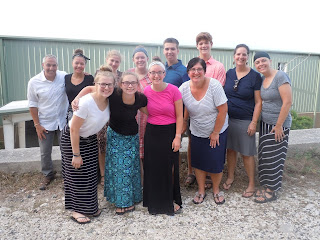 Today we had an early start. Our alarms went off at 5:30 to head to morning service at Church on The Rock. It was a very interesting but spirit-filled experience, it was very different from the way we worship at home. Instead of everyone packing in towards the front, and sitting down to wait for service to start, worshiping began the second you walk in the doors. Everyone was walking around praising God with open arms, letting the Holy Spirit fill them. The whole service was a moving experience and something no one will forget. 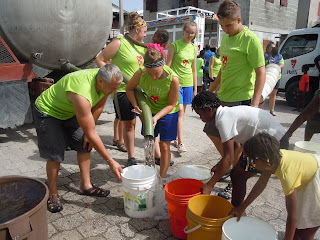 After the service we had our second water truck day. We only had time for two water truck stops today, but both moved us in its own way. The first stop, N'ap Boule, was a rebuilt neighborhood after a fire burned down a portion of the area. There are small apartment buildings in place of the shanties. Our second stop was near Hope Church, it was the second time we did the stop this week. This stop  was a lot more chaotic, because there were so many kids that wanted attention. At both stops everyone was able to make more connections with the residents of Cite Soleil. 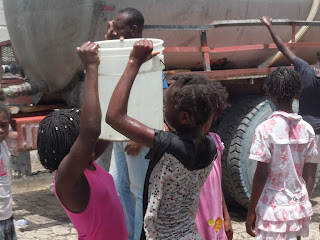 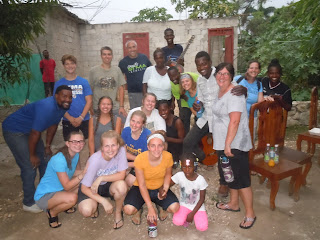 Our evening consisted of dinner with our friend Germain and his family.  Germain has been an employee of Healing Haiti for five years and was very excited to get to meet us, we were also very excited to meet him and his family. On the Tap Tap ride there, we invented a new game called "Tap Tap Soccer," which consists of playing soccer, while sitting down, on a tap tap! At Germain's, we were given a tour of his house, which we prayed in, over his family. After we prayed, we went outside and ate pizza and chicken. Towards the end of the meal it started to rain so we all ran into a small building on their property. While we were in the building, we started singing as one of Germain's kids played the guitar. Before we left we made sure to take plenty of pictures with them. The day was filled with moving, and eye-opening experiences, which filled our souls and will never be erased from our memories.

Posted by Healing Haiti Mission Team at 7:29 PM No comments: