On the final stretch of our mission trip, we made our way in a full tap-tap to Grace Church. The morning had been a hectic race to leave on time, causing me to forget my water bottle. Luckily, Norma was kind enough to share her extra bottle with me today. We arrived early even though we were actually late, but I guess no one is really late if they come to worship. We could hear the little kids getting their pre-church lesson, filled with the repetition of "Jayzee" which is Creole for Jesus and horribly misspelled by me (I can't help picturing Jesus in a Yankees hat next to Beyoncé). I guess a new rule was instated that kept the children from sitting with us this morning, but that didn't stop some adventurous guys from high-fiving us as they walked in. Instead, the littlest kids were watched by older kids, who themselves were watched by teenagers. Then there was a man with a mustache who I think was in charge of everyone under twenty as he was very concerned when kids would go to the bathroom. He probably thought they were just going to go play outside. Anyways, the music started playing, and church began. We recognized some songs, and enjoyed the ones we didn't know just as much. One little guy was playing air guitar on his bottle, hidden just enough so that the  mustachioed man would not see. We had to leave after the worship (which was really amazing) so that we could make our way to the beach. We felt a little guilty, but were tired from our week, and relieved to have some time to relax. 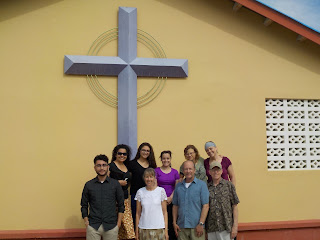 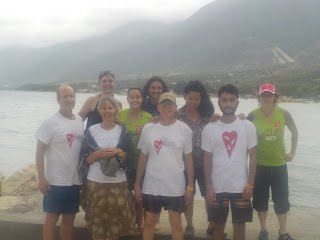 We played on this trampoline-of-doom floating in the ocean.: two trampolines connected by an inflatable bridge. Isabelle hurt her knee, Kaylee ran across just fine, Norma made her way across slowly but steadily, and a Brazilian UN guy tried to slip and slide his way across with some success. Carol lost her headband and I did a side-flip into the water (on accident). Afterwards, a few of us went snorkeling. I was hesitant to, but couldn't resist the temptation of some sweet coral. Zero sharks were seen (thank God), but a sea urchin, brain coral, and jellyfish were spotted. We all crunched ourselves on the shallow reef, bearing our scars to this day (today). I'd read in a National Geographic magazine that coral reefs around the world are experiencing bleaching due to pollution. This reef was pretty, but definitely bleached, a real bummer because now the fish have to find a different hang out. Carol had a rock activity (the mineral one, not The Ramones) planned for us, and some of us are coming home with rocks, and some left ours in the ocean. I bought some shells from a young man who said he liked Mexico, because flattery works sometimes. Walking back, I saw well off Haitian families chilling by the pool, hugging their well dressed children and smiling at their spouses.

We rode home in an even more full tap-tap while it rained. The tap-tap metal and the rain created a kool-aid of dirt water which dripped on us during the long trip back. We showered, then ate some sandwiches with fresh guacamole. It was so green that Carol joked that it glowed in the dark. The plan was to then go to a supermarket and buy Haitian goods. We made our way through a trendy part of Port-au-Prince. Club music was bumping, the street food was frying, and bearded hipsters rode their motorcycles through the crowds of young people. I love watching Anthony Bourdain, and he always says that hipsters ruin cities. In our country, these gentrifying millennials certainly do, but here in Haiti they show a growing young middle class. Of course the supermarket was closed, so we rode to another one. Carol was thrilled to show us her favorite goods, but I broke her heart by telling her that most of those products were from Hispanic countries. I still feel a bit bad, but Sam showed us some real Haitian stuff, so we were fine. Dan got a lot of coffee, and our battle money was carefully examined as the locals shopped. I drank my Limonade happily as Kaylee exclaimed that it was just a Seven Up. It's not.

We got home and found Christina and Al waiting for us to come back from our excursion. We talked about the reentry process, and how to deal with it. Naturally, we are sad about leaving. I am already anxious about school, texting my dad about how to print my essay that's due tomorrow. Montaigne created the essay to be an "assai", French for "an attempt". This week has been an attempt for us to understand Haiti, a country represented as only pain and poverty in our own country. We've attempted to understand the good and the bad, the poverty and the hope, the kids and the elderly, our prejudices and their openness. No, we did not save Haiti. We were part of an agricultural process by which seeds are being planted throughout this country. These seeds of hope are bearing fruit. A baby's smile, a job for a teenager, or a massage for an elderly man are a part of the process. Seeds grow and create orchards, and suddenly you have some prime land. I can see opportunity on the horizon. Colombus (who's in many ways a chump) saw this opportunity when he landed here too. This one documentary I watched talked about how the developing world just needs more opportunity. Luckily, Haiti, like all nations, is part of a new global network of human activity, commerce, and culture. Our team extended our hands, but ultimately it will be the Haitian people who pull themselves up. I want to close with another quote from another Californian, Kendrick Lamar, "If God's got us then we're gonna be alright!"
Posted by Healing Haiti Mission Team at 8:28 PM No comments: