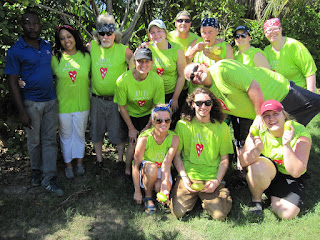 Today was another great day serving

💧 in Cité Soleil. This is an extremely impoverished and densely populated commune located in the Port-au-Prince metropolitan area in Haiti. Our team made five stops on this trip, three earlier this week, and two more today! That's 3,500 gallons delivered each stop for a total of 17,500 gallons of water we delivered!!!

Our third stop today was Fleri Farms. The first Fleri Farms site is a 28-acre plot located in the Menelas and northern Cité Soleil neighborhoods of Port-au-Prince, about 2 miles north of our daily water truck deliveries and the Hope Church campus. At Fleri Farms, Healing Haiti’s mission will be enacted profoundly: Leveraging resources to elevate and unify Haitian families so that the cycle of poverty is broken and the fabric of these communities is strengthened.

At the farm, one of the staff cut open some coconuts for us to drink the milk and then eat the fruit! Pretty amazing what Healing Haiti has in store for this country!

As we returned a little earlier than most days, we were able to go to the neighboring hotel and take a quick swim before dinner. It is our second to last dinner together before heading back to Minnesota. We are all so touched by this journey. This team is pretty spectacular. God is good and working through us this week, that's for sure.

The days leading up to the trip were exciting. Our group had very diverse personalities and different levels of experience in the mission field. God used each of our strengths and weaknesses to support one another. As a group we all had one thing in common on our mind that we wanted to receive from this trip. We wanted to see Jesus. As our week slowly comes to an end we can reflect back on what God accomplished through us and how he changed our hearts. Tonight as we came together and reflected on the day it became so clear that we achieved what we set out for. Even though this part of the world may seem so dark sometimes it is impossible to deny the presence of Jesus here in this place! We see him in the faces of the widows and the orphans that have absolutely nothing but still radiate with overflowing joy. We see him in each other offer relentless support and unconditional love to any of the Haitian people we encounter. We see his hand at work with the endless possibilities Healing Haiti has to better and serve the amazing country.

Posted by Healing Haiti Mission Team at 7:52 PM No comments: 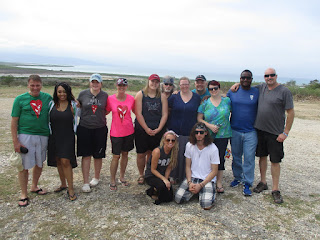 Today we went to Titanyen, a village north of Port-au-Prince, sparsely populated town, and considered one of the poorest rural villages in Haiti. The definition of Titanyen is "less than nothing", that is until Healing Haiti decided to build Grace Village in Titanyen which consists of Children's Homes, Grace School, Grace Clinic, Grace Church, and Fleuri Bakery and Restaurant.

Today we stood over the graves of over 200,000 Haitians that died in the 2010 Earthquake. Our driver's brother stayed home from school that day. Had he gone to school, he too would have died. God works in mysterious ways. The Haitian government built a huge burial grounds to those that died as a result of the earthquake. The bodies were brought to the burial site in dump trucks. They had no other means to transport them. The government also allowed people access to bury their family members if they died later as a result of the catastrophe as another 300,000 Haitians were injured in the earthquake and many died of those injuries. There is a very visible grave where the remains of a catholic priest were laid to rest. The past few years the government built a very nice memorial which in 2010 was simply a mound with a rock and an engraved sign that stood over the mass grave.

The elder visits was the single most powerful mission event for me (Bill). We were invited into the homes of three Titanyen village matriarchs. They were so sweet and humble and loved on us to. We washed their feet, calves and arms. Then massaged their feet and hands with lotion. Some received nail polish. When asked what we could pray for them, each of the elders stated to pray for someone else other then theirselves, it was beautiful.

This is an amazing place. They have extremely high standards for schooling. They grow their own vegetables and operate a restaurant and bakery as well. Their intent with the restaurant and bakery, just like the school, is to develop young citizens that fit into the Haitian society and that their skill set is favorable to the needs of the current economy.

All in all it was another wonderful day. The imprint in my mind of the three matriarchs will last forever. They were beautiful and spiritual women who seemed to love life and their families. We are on our way home in a couple days. We feel good and not so good about that.