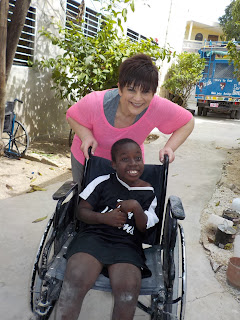 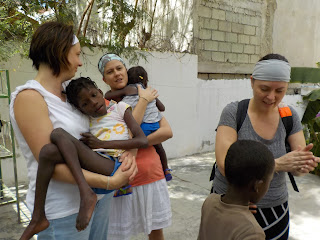 Simple.
If I have to use one word to describe our day, the word I come up with is "simple."  Not in the sense that it was an easy or unimportant day, but in the sense that all that was asked of us was to simply be present. Simply smile.  Simply love.

Today our team of 13 spent the morning playing with children at an orphanage.  Their playground consisted of a tire swing, small merry-go-round and slide, and a little playset. However, they were much more interested in reaching up to be held, holding our hands, smiling, simply being recognized as a beloved child of God.  None of them spoke English, and most of us don't speak Creole, but the universal language of simply caring was what was spoken.

One little girl who appeared to be about 3 years old was standing off to the side.  No smiles.  Very serious look on her face.  Not interested in playing.  She started whimpering and tears started forming.  I reached my arms out to her and she came to me.  I held her and she put her head on my shoulder.  I found a quiet shady area, and as I stood there I found myself instinctively rocking back and forth.  She coughed a few times, and I heard a rattle in her chest as she was breathing.  Her eyelids started to get heavy and eventually closed.  I continued rocking her as she slept and I watched my team as they interacted with all of the other children.  It was pretty simple.  All we were doing was being present and loving these kids the best way we knew how.  I looked down at the child I was holding who was sleeping in my arms and I was surprised at the tears that started forming in my eyes and the lump in my throat.  All I could think of is that every child deserves to be held and rocked -- particularly when they aren't feeling well -- and if that is the one thing that I could do for her, then I would gladly do that until my arms fell off.  Pretty simple.

We also spent some time interacting with children with special needs.  We were outside with no play area whatsoever.  But they all had smiles on their faces as we sang and clapped to songs and giggled as we gave them rides in wheelchairs.  One little boy in a wheelchair would motion to us, and as we would lean our heads in to him to see what he wanted, he would put his little hands on either side of our face and give us a kiss.  Wow.  These beautiful children were singing praises to God and showing US how to love the only way they knew how.
Simple, right?  Not really - in fact I really don't think there are words for that.