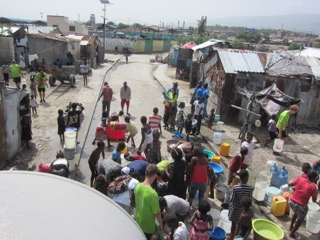 We started the day with pancakes and fresh mangoes and pineapples. We loaded up on bug spray and sunscreen and boarded the tap-tap. The ride there was hot and muggy. We stoped at the water truck filling station and met the driver and waited for it to fill up. 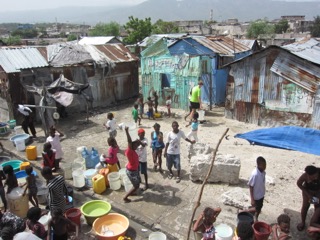 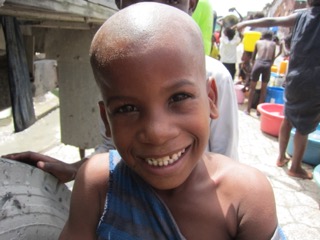 When it was full it escorted us out and we bumped down the rugged road. When we showed up at the first water truck station we were bombarded by a mob of little kids saying "Potem" (which means pick me up). So some of us scooped up a kid or two while the rest filled up jugs with water or carried water to the persons home. "Hey you!" is something you will hear often in Cite Soleil as the children are trying to get your attention. when the water truck was run dry we said goodbye or "orevwa" 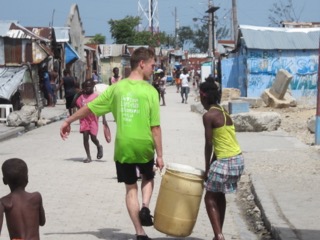 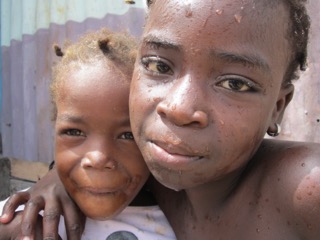 Then we headed to Hope church and ate snack.  We headed inside where a day camp was being held.  The kids stuck their hands through gaps in the concrete partitions (the gaps allow a breeze) and shouted Hey you! Then some kids wandered out of the classes and greeted us, some spoke english and some didn't. One of the little kids who was about 7 was holding a wooden red ring so we set up our water bottles and he played a game like horse shoe toss. then we set up different ways to play games with the wooden ring like rolling it through the water bottles and bowling. After all that we helped pass out rice and beans to all the kids. And then we just hung around until we got the go ahead that the water truck was full again. We played games and sung songs, the kids loved it and sang and danced to it even when we left. When the truck was ready we jumped on the tap-tap and headed to the next stop, 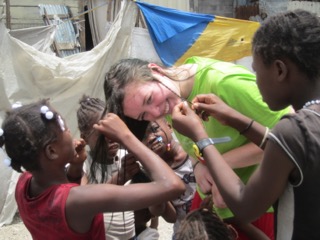 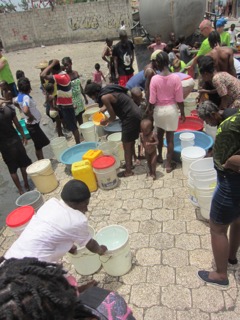 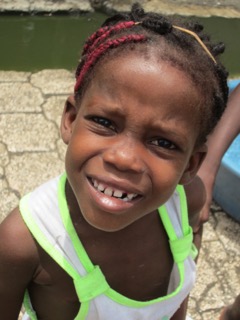 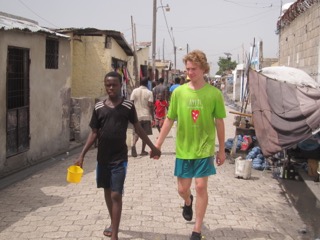 After the experience in Hope Church, we walked outside to the road. thankfully, while we where waiting in the church/school, the water truck had fixed a few hose problems and filled the truck with water. So, we immediately went into the field and started holding kids. stop two was the nicest so far. The first stop I felt was more busy with more crowded areas. this was very calm and the kids loved to be held. As we were leaving, something caught my eye. On my first trip last year, there was a kid I nicknamed 'Spider-Man kid' because of his Amazing Spier-Man t-shirt. He had opened my eyes to the kids and the area in an inexplainable, interesting way without intention. He had changed my life and viewpoint in the best way possible. As we, left, I saw him wandering the streets. I thought I'd never see him again, but there he was. It was good to see one of the boys who I'd had a short-lived friendship with. Seeing him made me happy. 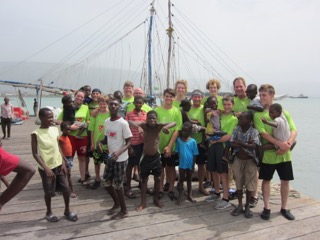 Posted by Healing Haiti Mission Team at 8:18 PM No comments: