Teamwork, frustration, adaptable, disciplined, stuck, guitar, fear, joyful... have all been part of our words of the day today and yesterday.

Yesterday was a water truck day. It was more grueling than I had thought. We had three water stops in Cite Soleil districts, which are numbered. Our first was by HH's new Hope Church, which we were able to see and attend to some injuries of children. The church is amazing and is serving many in Cite Soleil. On it's opening day, 5000 Haitians came! Cite Soleil does not have well-water, so people depend on the water trucks. HH water is free. When the truck comes, people line up their buckets and we help the line, the hose, and the people fill and carry their buckets. We also play with the children, "potem!" "potem" they say, which means "up!" as they want to be held. Sometimes we had three to four we were holding. We made three water stops, which took most of the day. 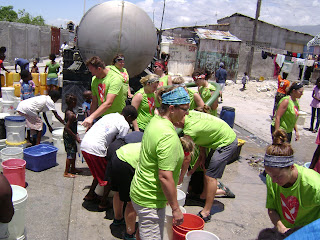 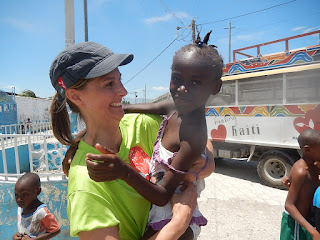 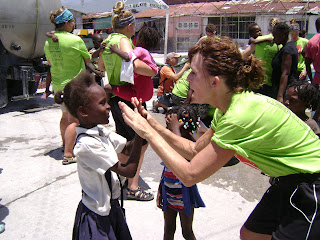 Today, Thursday, we went to Grace Village, visited the elders in Titanyen and then went to the new Haitian Memorial for the January 2010 devastating earthquake. Grace Village is about 45 minutes north of Port-au-Prince. We took the tap-tap there. GV supports Haitians with a school, health clinic, family housing, meals, bakery, and Grace church. The goal is to have Haitians be educated and independent to support themselves and families. Once thought an impossible vision, it is truly amazing!

Part of GV's support is eldercare. We visited four elders to bring food, care packages/bags, wash and lotion their feet and hands and arms, talk with them, sing and pray. When asked what they need, interestingly most said nothing and to give to others. They had everything they needed in God. Our last stop was visiting a couple. Although they did not have much materially in our eyes, they were so joyful - with each other, with their grown sons, and with their grandchildren. Pierre, the gentleman, wanted to dance, so Anna became his partner! You could see Fye (proud) in the sons' eyes towards their parents and in the parents' to their family. 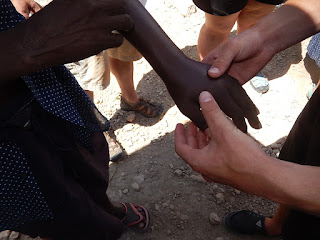 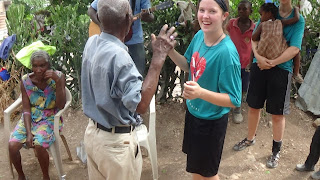 Perhaps one of the most powerful experiences we will take away from this trip was Brunee's (sp?) retelling of the Haitian earthquake at the Memorial built in January 2016. It down the mountain a bit from GV and is the site of a mass burial. Although English is not is first language, through his words and emotion and gestures gave us such a personal recollection of the 37 second earthquake, the aftershocks, and the immediate aftermath. He had just gotten out of trade school and was on the bus when it happened. No one knew what was going on b/c the last earthquake was in 1942 in Haiti, but it was in a different part of Haiti. He got off the bus and saw pieces of buildings collapsing on people, even his school he was just at crumbled. To make matters worse it was a little after 5pm and it was getting dark. Once he got to his uncle's house, he saw all other house around this house collapsed, but his had not. 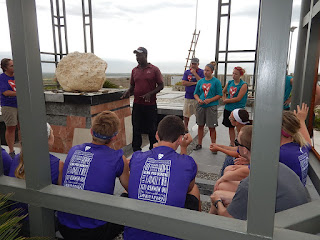 I recently saw a quote that said fear can stand for "forget everything and run" or "face everything and rise." As a group, we are seeing a lot of the latter in Haiti, not only from people within our group but also the Haitian people. It reminds me of Paul's words in Romans 5: 1-5


"Therefore, since we have been justified through faith, we have peace with God through our Lord Jesus Christ through whom we have gained access by faith into this grace in which we now stand. And we rejoice in the hope of the glory of God. Not only so but we also rejoice in our sufferings, because we know that suffering produces perseverance; perseverance, character; and character, hope. And hope does not disappoint us, because God has poured out his love into our hearts by the Holy Spirit, whom he has given us." (NIV)

-Jean and Haley Oswald and the Mahtomedi Team

Posted by Healing Haiti Mission Team at 6:05 AM No comments: