Friends and family! It’s Max back again with Jim. Jim is one of the adults on our trip and has 15 trips to Haiti under his belt. He is going to be doing the majority of the writing today so please enjoy!

Jim here, today was water truck day. Moved from Tuesday as another team needed to go yesterday. We prepped by covering with sunscreen and bug repellant and filled two large Culligan jugs each as we were going to be out in the sun and around mosquitos all day. Our Tap-tap left about 9:45 and by 10 we were in Cite Soleil where we followed the water truck to our first stop. Our team of 17 unloaded from the Tap-tap and were immediately recognized as the rock stars we are as all the kids knew our names. “Hey You” was the mass greeting and soon every available team member had one or two Haitian kids in their arms, on their backs or hanging on their legs. Some of the team helped the water truck driver get the 4-inch hose hooked up and ready to pour 3000 gallons of fresh clean water into mostly 5-gallon plastic buckets at the rate of one every 3 seconds. Needless to say the line of hundreds of women, girls, boys and a few men was “controlled chaos”. If someone tried cheat and get their bucket filled before their turn, the driver would throw the bucket away from the line.  Not all the water ended up in buckets as some slops over during the transfer time so kids occasionally with take an impromptu bath in the overflow.  Most of the water ended up where it was intended in the homes of the poor of this town built on a garbage dump over ocean bottom in the bay of Port-au-Prince. The truck makes 3 stops 6 days of week so delivers 54,000 gallons or 10,000 buckets plus many 50 gallon barrels. The population of Cite Soleil is estimated to be around 300,000 so there is no way we can provide all the water needed. But as far as we know we are the only NGO providing water to this community which gives us the opportunity to go in as short term missionaries and serve the poor and needy of this community in a unique way.

After the first truck load was emptied, the truck drove back to the filling station and got in line for our second trip. In the mean time our Healing Haiti Tap-tap took us to Hope Church and School where we toured, learned the history and had time to snack and fluid up. Three years ago this spot was a large pile of garbage near the “beach” in Cite Soleil that had been secured by HH to develop. A church and basic school structure was designed by MSAADA, a Minnesota architectural firm that specializes in projects in developing countries. The head architect has shared with me* that this was one of the most unusual projects his firm has done as they had to drill through the layers of garbage to find the ocean bottom to pour the foundation. Inside the church and the church yard one has no awareness of what the site used to be, but before we left we went around back to look at the surrounding neighborhood and one is reminded of the movie “Slumdog Millionaire”. The school educates young children up to adult literacy classes and has room to grow.

Max back again! So after we had our tour of Hope Church and School we loaded up and rolled out to our second and third water truck stops of the day. I had done all hose duty at the first stop so this was my first chance at being hands on with the kids. Just as Jim was saying, as soon as we swung open the door we were all named “Hey you” and the kids loved saying our name. One great experience from today’s second and third stops was with Ryan. As soon as Ryan stepped off the truck he met his new friend Sylvester. Sylvester was about five years old and he and Ryan clicked instantly. As the two communicated in a broken mix of Creole and English, a man selling bread came by. Sylvester had a dollar with him and bought a piece of bread from the man. Sylvester, a hungry boy living in the poorest slum in the Western Hemisphere then took the bread and lifted it up to Ryan for him to take the first bite. I think this speaks volumes about Haiti’s culture and the spirit of the people here. As Ryan said, “Wait the starving kid from Cite Soleil just offered the well fed visitor the first bite of what could possibly be the only thing that he has to eat for that day?” This act of selflessness is just one small example of how much of a life changing experience coming to Haiti can be. There are countless other stories from our experiences in Cite Soleil today but I will save those for the rest of the team to share with you in person. (There may also have been some showering in the water filling station where the trucks were supposed to be, but you didn’t hear it from me). After we packed up at water truck stops two and three, we got the chance to visit the kids at Haitian Initiative. HI was started by an American soccer player named Tony Sanneh and now is a soccer program for the children of Cite Soleil. HI has the kids go to school and stay out of trouble and in return they get a hot meal and a place to play and learn soccer skills. A lot of the team got a small soccer game running while others socialized with some of the kids. I, myself however, started to gather a group of kids to start my cult of “Jefvolution” As our saying goes, “Viva la Jefvolution” I got all the kids to line up at the far end of the soccer field, and on the count of three, we started running and screaming “JEFF JEFF JEFF JEFF JEFF” as we surrounded Jeff, our exulted leader and idol. There is a great video and a bunch of pictures of this and hopefully we can get some of those attached. The team then headed home and half of us crashed immediately, sleeping until the tacos were ready. I think everyone had a super fun day today and all of us are looking forward to another water truck day later this week (hopefully. Remember folks, this is Haiti. As much as we would like to plan, we aren’t really in control and just go with the flow most of the time!) The soccer took a day off today but Team USA is looking to come back firing tomorrow. Grace Village is on tomorrow’s itinerary so look forward to that! 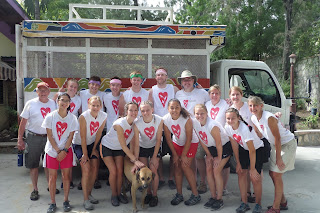 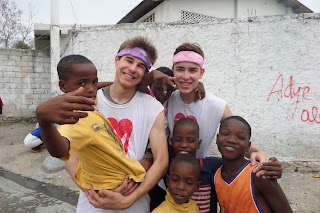 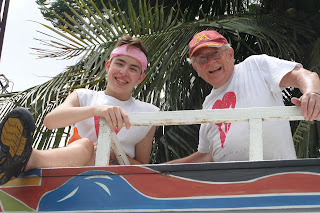