Our day in Monfort

Our day began as always with the delightful tastes and smells originating from the house kitchen and Russ' tunes blasting throughout the halls into our dorms. After breakfast and our usual ritual of smothering our skin in bug and sun screen we were off riding in the reliable transport truck known as "the tap tap" with our Hati 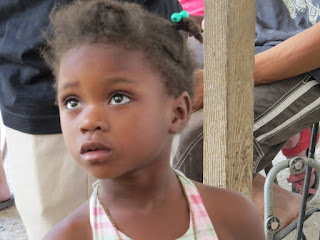 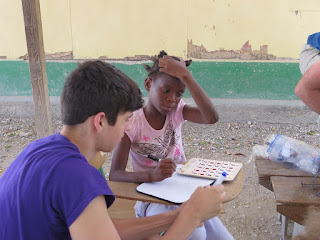 ian translator and friend "Valerie" at the wheel.  A ride through Port-au-Prince is always interesting to say the least and their one was no exception, driving in haiti can best be described as organized chaos where there are no true written rules to follow but it seems to work for them. As we drove we witnessed burning trash, stray cows, endless salesmen, some of Haiti's breath taking landscapes with huge mountains, and most interesting to me, A few armed U.N peace keepers patrolling the streets. When we first arrived to the dirt road leading to the Monfort Institute for the deaf children of Haiti we where greeted with the usual 10 foot wall with barbed wire and a metal gate. When the tap tap entered we drove down a narrow path with plenty of bumps and trees to scratch the side of our beloved tap tap, after we continued like this for a good three minutes we found ourselves in what almost looked like a small village. Once the tap tap came to a halt we where all told that we would be meeting and playing bingo with some of the (deaf) kids. I was given a suitcase filled with bingo prizes and goodies that weighed a good 25 pounds, I carried it out to a small concrete wall under a tree while we waited for our other translator "Emanuel" to get one of the Staff so we could begin our tour and most importantly Bingo. About Twenty minutes passed before A Haitian woman dressed in white appeared accompanied by four kids, three girls and one boy between the ages of 4 and 10. I do not think I have ever seen a group of kids so happy and excited to see us this entire week, with is understandable because the sad truth is that the deaf population of Haiti is looked down upon and neglected. After we became aquatinted with the sister and the children, we began a tour of the facility. After the tour some of us regrouped in the tap tap for some snacks and water. Ten minutes had pasted before Jon number two, better known as Jon Hayes joined the three of us (Austin, Micah, Chris) with some sandwiches he had received from the cook when he had peeked his head in the kitchen, he offered one to me so of course I tried it and it was really good even though we had no idea what kind of meat was used to make the sandwich! Then we did bingo and it was great - Austin
Posted by Healing Haiti Mission Team at 8:48 PM No comments: