Jack and I went to Dare's and were truly privileged to meet some great kids with that have great challenges.  Firstly, you should understand the importance of an orphanage like this because in Haiti you are considered an outcast if you are disabled.  Lena, is a 6 year old that has a very big voice that likes to play with balls and roamed about meeting all of us.  She has a bright smile but is very limited in her mental functioning.

Kenny is a 14 year old with a beaming smile.  He has use of only one arm and his legs do not function.  He and another boy about his age, who also did not have the use of his legs, listened intently while Jeff did his best to read from their native bible.  Sometimes they would correct him and other times they would cheer.

However, the highlight was meeting Fronzy. We were warned about Fronzy's clap before we went which was funny as Katie and I immediately recognized it when we reached within about 100 yards.  We entered to the sound of the clapping and singing that sounded like it was coming from a southern worship tent.  Fronzy is 25, blind, and has a rhythmic clap that I would call deafening if it weren't so beautiful.  Beautiful in the sense that it is his instrument as he sings and heartily taps his feet.  His smile radiates as sweat pours down his neck and belts out spiritual songs that I think speak directly to the good lord.  His singing brought all that could, to song.  The entire time we were their the room was full of joy but none more so that when Fronzy was singing.

The afternoon brought another really neat experience as we planned an afternoon of soccer with the neighborhood boys.  (we need to work on getting girls as well but culturally they do not play sports)  We packed peanut butter and jelly sandwiches, apple squeezes, and water for the boys.  We loaded the lunches, along with 21 neighborhood boys, and drove two tap taps to the Bobby Duvall soccer fields.  They were not Shakopee Soccer quality (some grass, a lot of gravel, and kind of level) but for Haiti, they were amazing.

The relationship with the neighborhood boys has developed over the past 6 years and is a great story in itself which I'll let Marijo elaborate on as she knows all of the history.  With that said, it was a very rewarding day of soccer, smiles, and true friends.

It was fun to watch the banter among the Haitians, because they take their soccer seriously, but not today; it was about comradery.

Palms up,
John and Jack Canny 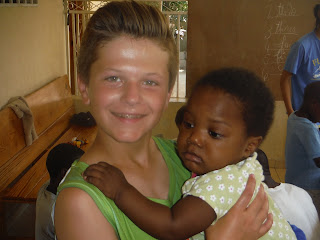 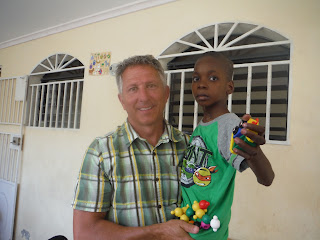 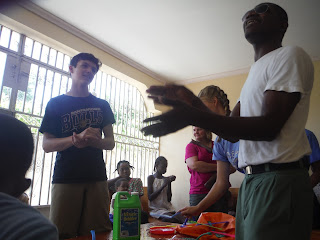 Posted by Healing Haiti Mission Team at 9:09 PM No comments: