Today we visited the Mass Grave Site from the 2010 earthquake, Grace Village which is an orphanage/school, and a few elders that live in Titanyen. It was about a 45 minute drive from our guest house to the grave site. The grave site was set on a hill overlooking the ocean. The grave site was built in 2014, but before that it was just two crosses up on a hill with mass graves around them. The memorial was a beautiful garden full of flowers and plants. It is estimated that 300-400,000 people were buried near or at that memorial site along with an unknown amount of other deaths. After that, we drove a few miles down the road to Grace Village. This is a home for orphan children, a church, a bakery, a clinic, and a place that provides jobs for the people of Titanyen which means, "less than nothing". We got a tour of the village and the bakery. At the bakery, a man named Jake told us about the bakery, and its origin. The main goal of this bakery is to provide stable jobs for people so they might be able to provide for themselves. Grace Village consisted of many homes for the children, as well as a large school, a garden, and a medical clinic. The school there was from kindergarten to grade 13. The kids graduated around their mid 20's. After they graduated, the people of Grace Village helped them transition into life on their own and provided them with a job at the bakery, as well as some basic life skills.
After visiting Grace Village, we went to visit some of the elders living in Titanyen. We were able to visit with two elders, Edmund, and Elitane. They were very sweet people, but they were very sick and were struggling to take care of themselves. The first elder we visited was a man named Edmund around the age of 80. He was very sick, blind, and partially deaf. He wasn't feeling well, and was having some mental issues, such as talking to himself, and thinking that someone was trying to harm him. We sang Glory to God with him, and were able to pray for him. This was a very emotional experience and was a time that God was able to open our eyes and hearts to the people of Haiti in a new way. Next, we visited a woman named Elitane. She wasn't as sick as Edmund, but her husband was very sick. We came in to her house and he was very skinny, all you could see was bone. We were able to wash his feet and give them some food. We sang 10,000 Reasons with them and Amazing Grace. This stop was much more emotional than the last one, and some of us were unable to visit with them due to our emotions. To sum up our day we're going to share a quote from a song called Jesus Friend of Sinners 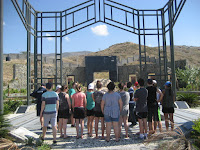 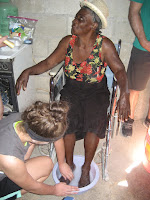 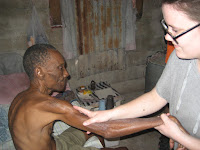 . "Oh Jesus, friend of sinners, break our hearts for what breaks yours." Jesus definitely broke our hearts today, and opened our eyes to see his beauty.