I wanted to express some of my thoughts about our time at the Croatian orphanage, which we visited on Wednesday.  First of all the kids were great.  They lived in a well kept compound and seemed to be well cared for.

The kids sang some songs for us and we did a skit about Jonah and the Whale.  Coincidentally our translater for the day was Jonas…  the skit was great (thank you Dawn for writing the script) and was well received.  Then the ladies did nail painting and other things while some of us played basketball and volleyball (with a soccer ball, the net was a row of chairs).

I could not help noticing that the basketball backboard was broken and only about 20% of the board was intact.  Being from Kentucky, this of course was bothering me.  Everyone deserves to have a functioning backboard!!!  It actually took me back to when I was in the 5th grade (about the age of some of the kids).  I didn’t have a Hoop and I desperately wanted to make the 6th grade team.  My dad, seeing my delimma, looked around at what he had available (he worked for the electric company).  He took the wheel from a round wire reel and attached it to an electric pole and planted it in the middle of our back yard.  That was in 1970.  It became my hoop.  I played and played and wore out the grass down to the dirt.  I also made the 6th grade team!  OK, moving on, what does this have to do with Haiti.

So, because I have some expereience in Latin American cultures, I knew that nobody would mind if I helped out a bit.  Guided by, I believe some inspiration, I looked around the sheds on the grounds and low and behold, there were a few boards.  One of them, a piece of plywood, was cut to exactly the shape and size that would work as a backboard. Awesome!

Feeling some hope, I looked around and found some more boards that would work as supports.  Then the little handy man for the compound noticed that I was doing something.  Once I sort of explained it to him (bit of a language barrier, but hoops is hoops) and laid out the boards, the light bulb came on and he right away went and found some very rusty nails and a hammer.

Now that I had buy in from one of the locals, we were off to the races.  Then Dale and Brian from our team pitched in and joined the effort.  Our translators Max and Jonas dived in and pretty much took over.  Best of all were all the kids, mostly boys, who gathered around, watching and learning, wanting to participate in the project.  It was especially fulfilling that they could see men, especially Hatian men working, accomplishing something, completing a project, and especially doing something that would benefit them as hoops players!!

It was a great blessing to all of us to see the Hatian guys take over and finish the project.  For me it was a blessing to be used by the Lord.  In an unexpected way, to make a difference…  For the boys, they learned to take what you have at your disposal (just like my Dad taught me), make something of it that makes life a little better for someone else…

Afterwards, everyone played and enjoyed the new Hoop/Backboard.  Thank you Dad!  For showing me.  Thank you God for providing the materials and working through us to make things a little better.  But thank you God especially for providing a teaching moment.  So beautiful to see the Haitians take over and finish what you started! 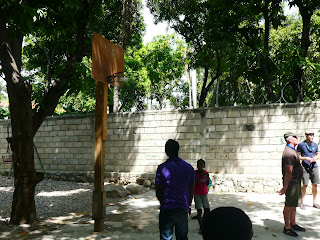 Posted by Healing Haiti Mission Team at 5:54 AM No comments: