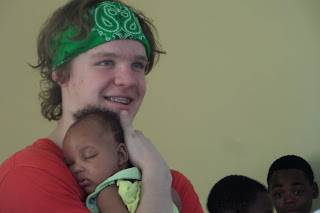 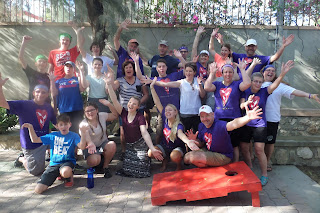 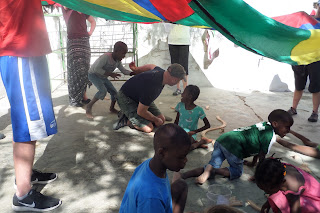 Today we went to Dare's and the LaPhare's. They were both orphanages in Haiti. We woke up and ate a delicious breakfast that consisted of eggs, french toast, mangoes, oatmeal, and a fruit juice. After breakfast we went to start our adventure! We started at Dare's. Dare's is a orphanage for kids with special needs. As soon as we got there the kids swarmed us with hugs. They loved to be pushed in wheel chairs around the house! When we ran them around the house they would yell, "BEEP BEEP!!!" imitating the cars in the streets. We brought the chalk out and the kids drew all over the place! They also loved the parachute we brought out for them. They would wrap themselves in it and we would come tickle them. We met two guys named Fraunzie and Vahnu. Fraunzie was blind but he could sing very well! After Dare's we went home for a quick break. At about two, off we went to Laphare's! We brought two soccer balls for them to play with. We also made bracelets with beads for them to make. There was a little Haitian baby that everyone fell in love with! Once we got back to the house, we decided it was time to take a dip in the hotel pool a little ways down the road. We played sharks and minnows, while eating fries and drinking Cokes. When we got back we ate a delicious Haitian meal that our cooks made for us. Back at the house the band "Haitian Nation"(Grant Lovitz, Trygve Hanson, Maddie Fuls, Kaylee Hanson, and Jake Henkemeyer) performed their version of "We Will Rock You". We then did our devotion about what that day stretched us the most throughout the day. We closed our day with a great slideshow of pictures of the day. 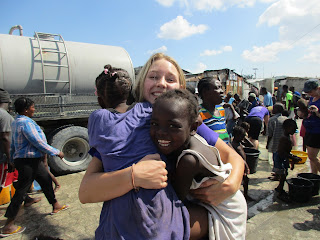 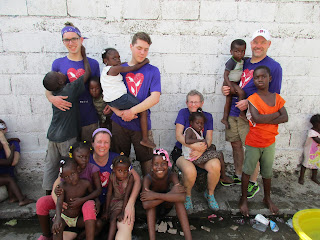 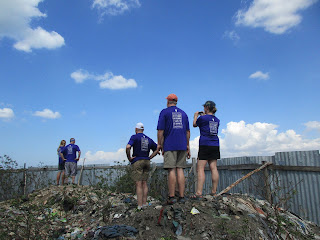 I came to Haiti with expectations of garbage, poverty, and thought I was prepared to get my heart broken. Pictures and stories paled in comparison to what it was actually like to see people who desperately needed water and love. Between the hugs, kisses, games, and dancing with naked children covered in mucus and pee, there were real bonds formed with real people. One of the most influential moments for me was returning to the church after providing water for our first part of town. Upon climbing a pile of garbage tall enough to look over the fence, we saw a broader picture of where we had just been serving. We found a great big ocean with shores of garbage on the other side. Medal slates of houses lined the water and pigs bathed in the filth. It was one of the many moments that took my breath away and will leave a lasting impression in my core. I knew I was going home to a clean place with good food while this population had no escape. It was a day full of pain, humility, and love. I couldn't imagine a more impactful first day!