My name is Katy Gross.  My husband and I are on our first mission trip to Haiti.  In preparing for this journey, we had lists of things to do and bring.  Since I am an elementary teacher, I volunteered to organize the activity we would be doing with the children at various orphanages.

Today we visited Dare's, an orphanage for children with disabilities.  We were greeted at the door by one gentleman who is blind with a smile reminding me of the Cheshire cat.  We proceeded to a small room with 24 kids and a long table in the center.  The faces of the kids brightened up when seeing us.  Many were on the floor unable to walk but very capable of scooting and getting to wherever they wanted to go.  Others were able to stand and walk. 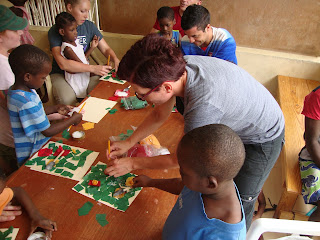 We pulled out our supplies for our craft activity.  We were going to put a layer of green tissue paper (cut into small squares) for the first layer, and then make poppies by adding red, orange, white, and black by using a pencil so the tissue paper would stick out.  But, before putting the tissue paper down, what do you need to make it stick?  Glue!  And, boy, did the kids LOVE the glue!  Many kids weren't even really interested in the tissue paper.  They just wanted to keep playing with the glue:  adding it to the paper (even on top of the tissue paper), scooping up a big glob and letting it run down their hand, and, of course, eating it.  My husband Larry even had to wrestle with a boy who had one of the glue brushes clamped in his mouth with the biggest grin on his face.  He was loving it! 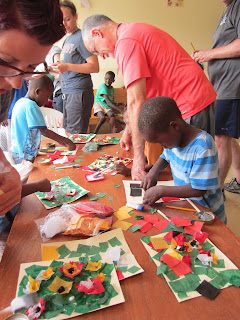 There were a few kids who were really paying attention and learned very quickly what to do.  Keep in mind, we speak different languages.  They just watched and copied what we did.  It was amazing!  There were some kids who insisted on doing everything themselves.  There were others who wanted or needed some help.  And there were others who had a better idea instead of making poppies.  One boy must have studied Picasso and cubism because he was lining up the pieces of tissue paper very precisely in a specific order.  Don't even try to mess with his idea.  It was perfect the way it was!  Another older boy, who was very patient while waiting, got my attention to get some supplies.  His project ended up being so fabulous.  He made about 8 perfect poppies in the center of his paper.  It was beautiful!  We tried to ask him by motioning if he was going to hang it up on the wall.  He showed that he would.  He was very proud!  What an awesome moment!

Our team worked so well together helping these kids.  Some kids wanted to do the project.  Some wanted to be held.  Some wanted to play with the bubbles that we brought.  Our team rolled with the punches.  It was pretty chaotic, but there were no temper tantrums--by either the kids or adults!  We ended our time singing "God is so Good."  The blind boy starting clapping reminding me of Stevie Wonder.  Pretty cool. 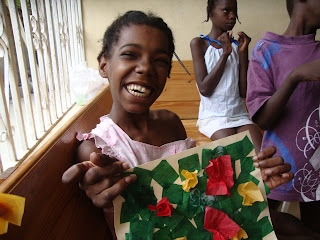 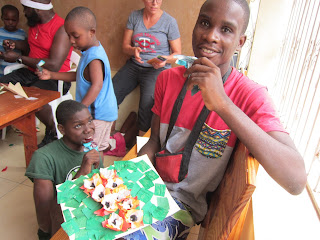 This afternoon we went to Apparent Project.  It's a business that was started by one person with a great idea.  They make items out of regular materials that are so creative.  It now employs about 350 people, affecting about 1500 people (their families).  They make a great wage making quality products.  I've already unknowingly purchased a product from this establishment through Trades of Hope--a wall hanging saying "Peace Love Joy" made out of steel drums that I gave to my mom for Mother's Day.  I loved it so much I bought another one for myself!  I also purchased coasters made from recycled cardboard cut very thin and rolled in a circle.  There is also lots of jewelry and other decorations.  Needless to say, I spent a lot of money.  But it's okay--I warned my husband ahead of time.  :) 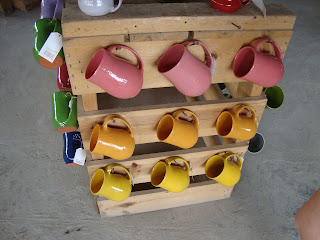 Later in the afternoon, we got to enjoy an hour in the pool at a nearby hotel.  It was fun bonding as a team racing, talking, and relaxing.  Then we got to play soccer with the neighborhood boys again.  This time it was 3 on 3 with a goalie each.  The boys decided to have USA vs Haiti.  They were toying with the adults.  It was pretty pathetic.  The first day, we got DRILLED!  Josie and I have the bruises to show for it!  Today the boys went easy on us.  As more boys joined in, the teams changed up and were no longer USA vs Haiti.  That's when the boys got more serious and started playing like normal high school boys with lots of uncalled penalties but also with lots of smiles and laughs.  They are so welcoming.  Anyone can join in the game.  They are lots of fun! 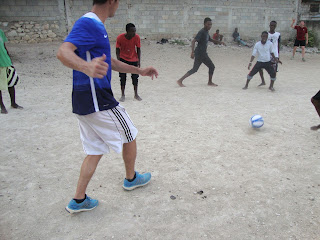 Tomorrow we are off to Cite Soleil with the water truck again.  Can't wait! 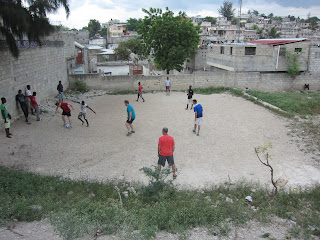