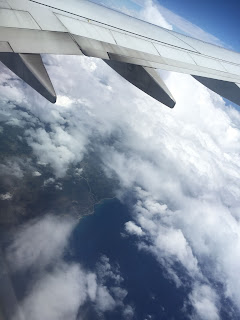 Well today, May 23rd, I got to fulfill a dream that I have had for a long time now. I got go back to my home country on a mission trip. I had talked to my amazing wife about this trip for a while now mostly about going home and seeing what it would be like to be back in my birth place and then she told me that she had been wanting to go to Haiti for more than 10 years. When I arrived in the country I was kind of nervous and excited all at the same time. I was mostly kind of scared because I didn't want to cause any trouble, not sure why I would be a problem but for some reason I thought I would be lol.

When we arrived in customs I was surprised with something. Everyone that was from out of the country had to pay $10.00, I didn't know this but since I was born here in Haiti I didn't have to pay to get in to the country which was pretty cool. We then took a ride in a tap tap / Haitian Taxi to our compound and it was amazing driving through the city and it was very interesting looking at the street  as we made our way. I saw people on Dirt bikes and old big trucks and cars which was something I didn't think I would see being in Haiti. The road it self was made of lime stone.

I gotta say my favorite part of the day was when we went to play a game of soccer with some local kids. I was talking to some of them and the crazy thing was they knew instantly that I was from Haiti. But they also knew that I didn't speak the same language. I still talked to them and made great conversation. I found out that most of them all go to school and the main local that I talked to said that he wanted to be an engineer that would design buildings. I told him that I work in concrete and that we build big commercial panels for buildings. He thought that was pretty cool. Then we finished the soccer game, it was amazing.  We played in this old dusty dirt field and everyone was playing for keeps. The best thing was the locals didn't even wear shoes they just played in their bare feet. Now there was sharp rocks and some  small broken things that were in that dirt and sand, but it didn't bother them.

I must say that this has so far been a great experience and I know that its just going to keep getting  better. All I can think about is how much I'm gonna miss this place when I go home. Being in a place that you haven't been in for 27 years and then you go there and people automatically know that your from the same place thats just an awesome feeling that I can't describe. Unless if you're in my shoes then you know. But I'm gonna get to bed and make sure that I'm well rested and at full capacity to help out and serve tomorrow. Good night and thank you all for helping me get here to fulfill a dream.
-Jonathan Niesche-
Posted by Healing Haiti Mission Team at 2:56 PM